Captain Greg Schultz is in charge of the Police Chaplain Program for the Council Bluffs Police Department. The purpose of the Council Bluffs Police Department's Volunteer Chaplain Corps is to provide a ministry presence to law enforcement personnel, firefighting personnel, and members of their families in such areas of spiritual care and religious support.

Former Police Chief Mark Moline first implemented the Chaplain Program in 1986. The first volunteer chaplain, an ordained minister, began working with the department the following year. By 1992, the department had five chaplains rotating on-call every six days. This core group of chaplains stayed active until 2003.

In May of 2009, under the direction of Police Chief Ralph O'Donnell and Captain Terry LeMaster, the Chaplain Program was given high priority to be re-instituted and the active recruitment of prospective chaplains began. This process resulted in the recruitment of seven ordained ministers who make up the volunteer Chaplain Corps. Each of the chaplains have received training on basic police procedures and also participate in regular ride-alongs with officers to better acquaint themselves with their police duties. Some of the chaplains have also attended critical incident stress management training and other ongoing chaplain training involving other metro area and regional chaplain organizations.

The department provides each chaplain with a badge and wallet as well as a nylon windbreaker jacket that identifies them as a police chaplain. Our police union has also provided blue polo shirts and baseball hats identifying them as police chaplains. The department believes this attire brings uniformity and professionalism to the Chaplain Corps. The Chaplain Corps rotates every seven days and are available for emergency incidents.

If you would like to know more about the Council Bluffs Police Department Chaplain Corps, you may contact the chaplain liaison, at (712) 890-5219. 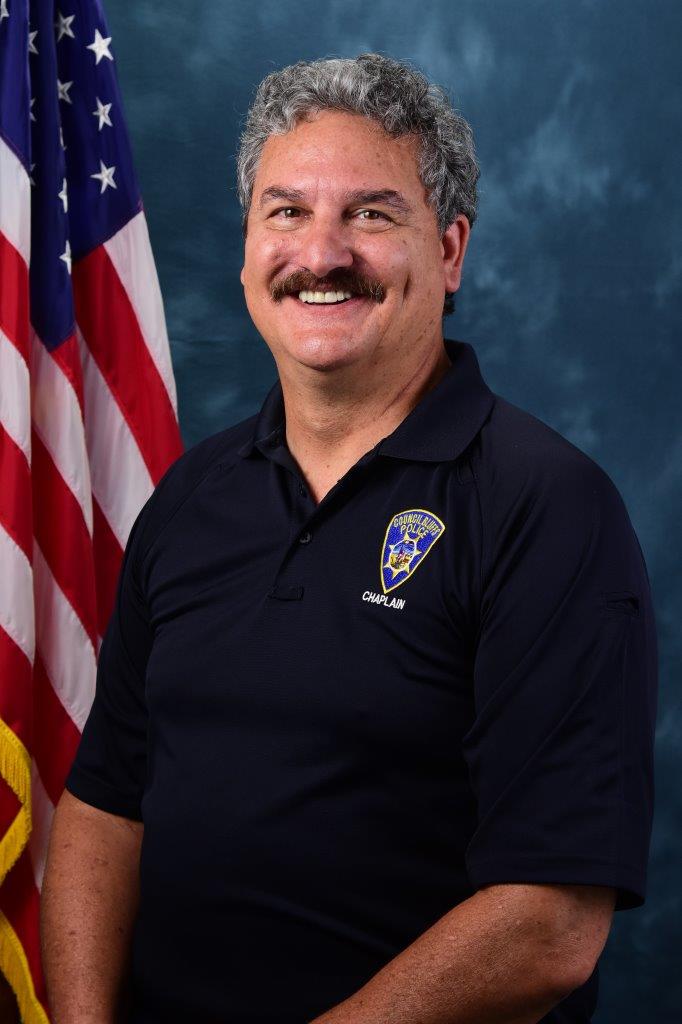 “Ward” Doering came to our department in 2019 as a transfer from the Omaha Police Department Chaplain Unit. He was a Chaplain with OPD for nine years, but lives in Iowa with his wife and wanted to do something closer to home. When he was sworn in, Chaplain Doering told us “As a minister, I’ve always been involved in non-traditional ministry. I was president of the Omaha chapter of the Christian Motorcycles Association and after six-and-a-half years as a military policeman, [becoming] a police chaplain just seemed like a perfect fit that combined my love for God and my respect for law enforcement.”

John  is married to his wife Doris and has two children and four grandchildren. 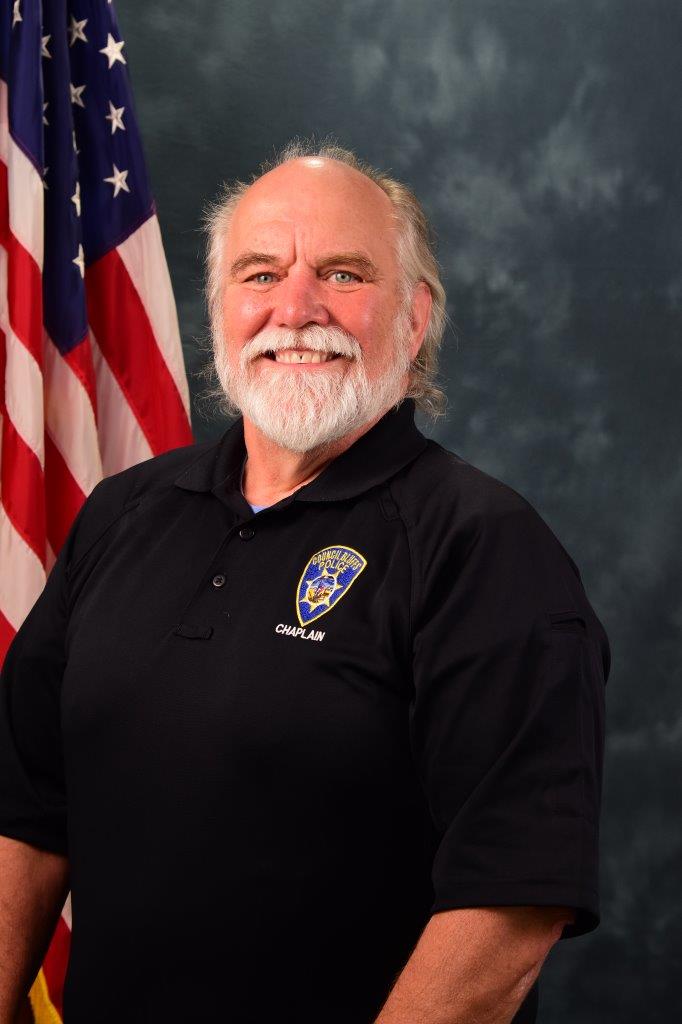 Anthony David Portero Paff began serving as a Chaplain for the Council Bluffs Police Department in the early 1990s. He came to serve St. John's United Church of Christ in Council Bluffs in 1989. Ordained in 1983, he served churches in western North Dakota. A Master of Divinity graduate of the Pacific School of Religion in Berkley California, Tony received a Master's Degree in Spiritual Direction from Creighton University and a Doctorate from Chicago Theological Seminary.

Married to Maria Aurora, Tony and his wife have two children. Tony is also fluent in Spanish. Tony has also served in the community as a hospital chaplain and president of the Council Bluffs Ministerial Association. 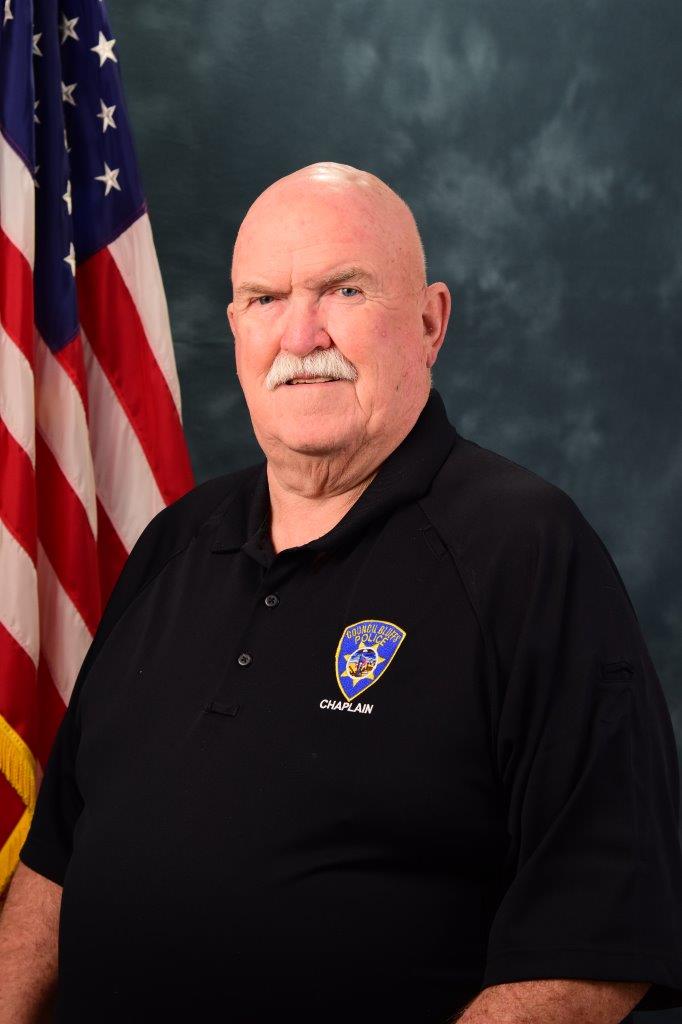 Jeffrey “Lynn” Saathoff has been a great addition to our Chaplain Corps when he started volunteering in 2018. He grew up in Carter Lake, Iowa, and attended Thomas Jefferson High School. He worked for Omaha Ambulance Service for 38 years and also worked in our Police Records office. He attends First Christian Church and knows many of the officers very well. He and his wife volunteer regularly for the community and he enjoys serving our community. 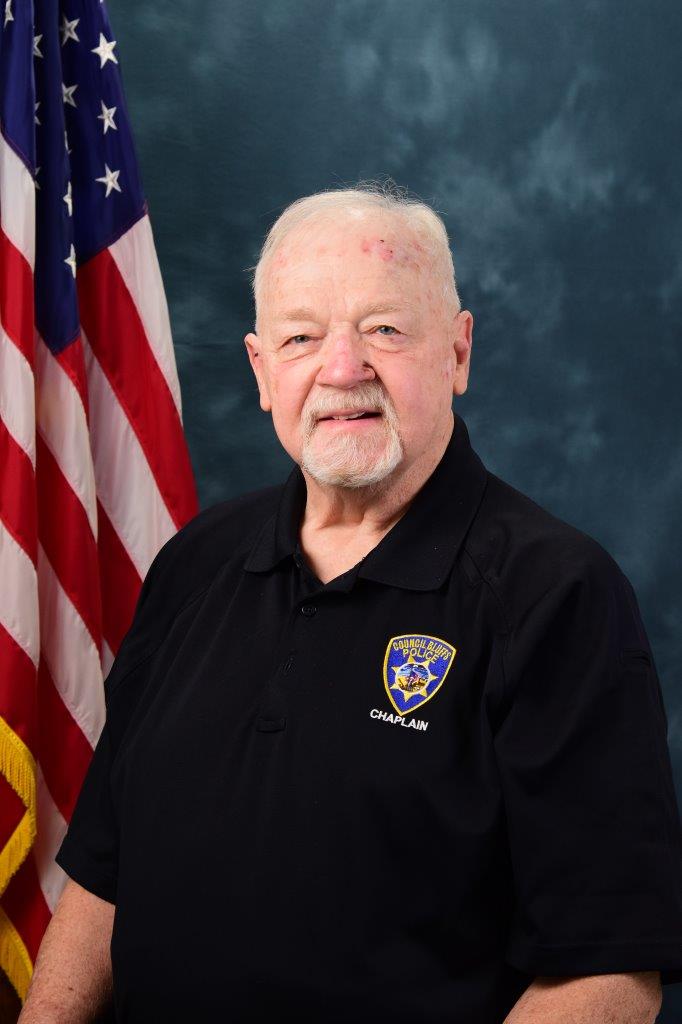 Rev. Ken Sewing joined the Council Bluffs Police Chaplain Corp in July 2009. He was first called to the ministry and ordained in 1979 and is an Evangelist in the Community of Christ Church. His home congregation is CoC Central Congregation in Council Bluffs. His responsibilities as an Evangelist have included assisting in bringing Evangelist ministry to 26 Community of Christ congregations in Western Iowa, Eastern Nebraska, Southeastern South Dakota, and other locales as requested.

In the past 37 years, Rev. Sewing's assignments have included, youth ministry, home ministry, hospital visitation ministry, congregation pastor, administration, and adult education in addition to an emphasis on family ministry and missionary outreach. His current ministry, in addition to serving as a volunteer Police Chaplain, is focused on individual and family spiritual enrichment and growth. Rev. Sewing's father was a Council Bluffs police officer in the late 1930s and early 1940s. His son is a veteran police officer in Iowa.